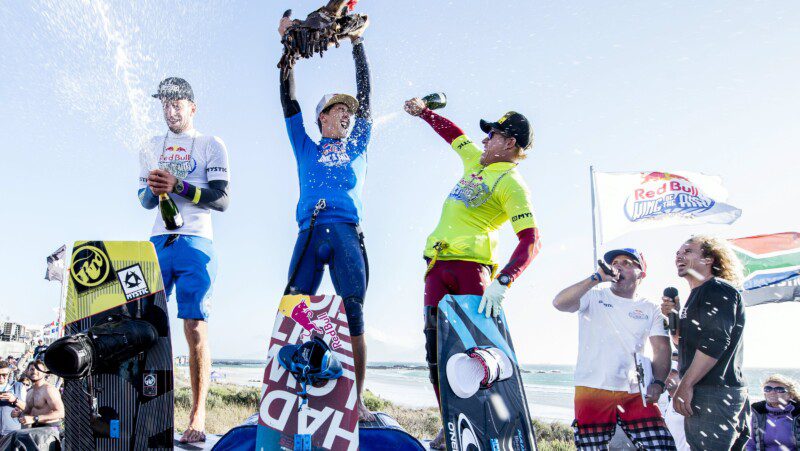 Cape Town (South Africa) – Every year Cape Town and her prolific South-Easter plays host to the world’s best kiteboarders. For the past three years, they have competed in what is largely considered to be the pinnacle of big air kiteboarding, Red Bull King of the Air.  With the competition – due to take place at Big Bay on the windiest day between the 30th of January and 14 February – an epic list of riders has been announced to compete for the 2016 title, including defending champion, Aaron Hadlow (GBR).

“For the last 15 years I’ve spend my ‘winters’ in Cape Town so it felt really special to win an event here, in front of so many friends,” said the five-time world champion. “It was all the first time in many years that my parents got to see me live on a podium.”

“I’ve been in Cape Town for the last couple of days and have started preparing for the competition. I use the extremely windy days to test equipment and get back into the swing of things. Then, once January comes around, I focus on it a bit more in the weeks leading up to the event. It’s all about time on the water and confidence in the strong winds.”

Hadlow landed two massive megaloop KGBs in the 2015 final to snatch the title previous winners, Jesse Richman (USA) and Kevin Langeree (NED). All three are set to return to see if they’re able to claim the title a second time. “I find choosing a winner of the comp unpredictable – you can always look at previous champs like Jesse and Kevin but there’s a long list of names that can put on a performance at the event. Despite there being some favourites I really feel the field is wide open for anyone to win,” Hadlow said.

The rest of top 12 from Red Bull King of the Air 2015 return with the exception of crowd-favourite Ruben Lenten, due to illness. The remainder of the field is then made up from video contest entries (selected by the judging panel) and two wildcards. Two-time World Kiteboarding Champion Youri Zoon (NED) and South Africans Oswald Smith and Andries Fourie are amongst those who will compete.

For more information head to: www.redbullkingoftheair.com